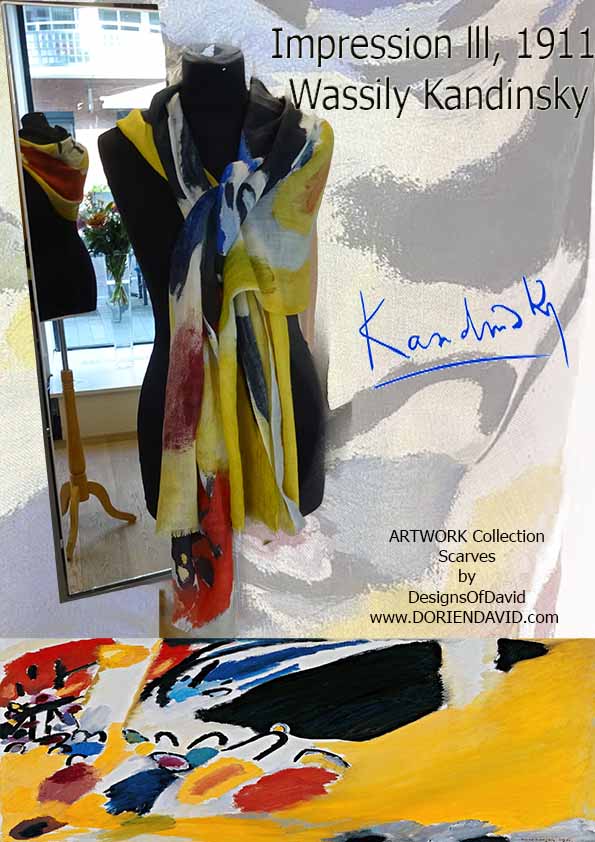 View of the Golden Bend of the Herengracht, 1672 by Gerrit Berckheyde, Rijksmuseum Amsterdam, scarf €95.00

The creator of the first modern abstract paintings, Wassily Kandinsky was an influential Russian painter and art theorist. He studied at the University of Moscow, and was later professor at the University of Dorpat in Estonia. He was 30 years old when he began his studies in painting. In 1921 he taught at the Bauhaus school of architecture in Munich, until it was closed by the Nazis in 1933. After the Bauhaus was closed, Kandinsky moved to Paris.

Wassily Kandinsky popularized abstract painting in the last years of the19th century and early years of the 20th century. Kandinsky the artist stressed the integration of the visual and aural in his unique viewpoint on the form and purpose of art. He perceived noises as colors, and this odd perspective influenced the creation of Kandinsky’s artworks. Kandinsky’s paintings sought to demonstrate that absolute abstraction allowed for deeper, sublime insight and that imitating nature simply hampered this endeavor.

Well, in this Kandinsky painting we find sound represented by an audience who have arrived for a concert. They line up along the left side of the painting, formed from abstract shapes and lines which was typical of the artist’s style at this point in his career. Classical music also has a strong connection to Russian history and so this was another example of the artist displaying the best qualities of his home country within his work.