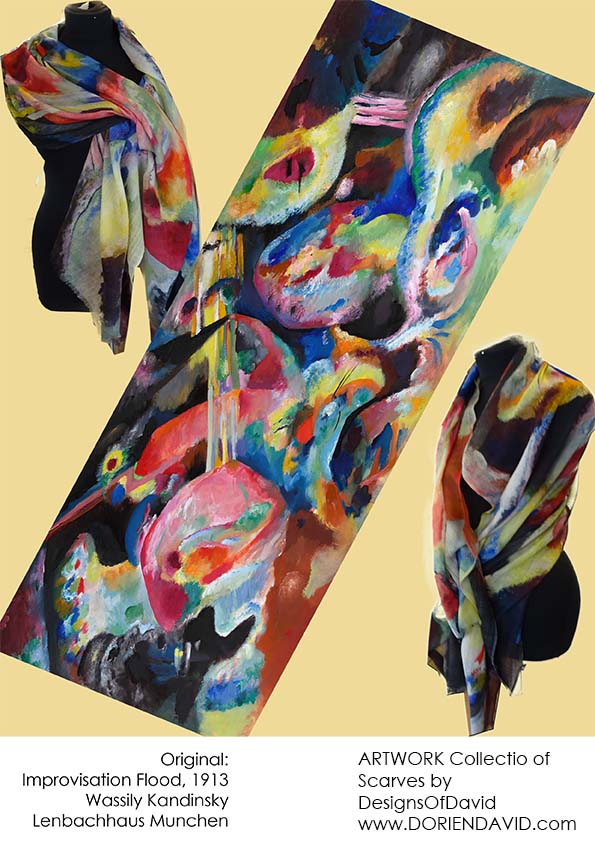 View on the Erasmus Brug of Rotterdam (sepia) by David (DesignsOfDavid), Scarf €95.00

The ARTWORK Collection of scarves is a unique and personal choice of international works of art by Dorien and David. Resources are the international art museums with their public domain art. The selected works of art are from all times and all places.

If possible and available we give information on the title of the artwork, the date, the creator and the museum. Original creator and title we print on the scarf.

David (DesignsOfDavid) takes care of the digital representation, based on the original version.

Some earlier scarves of David from the Collection ‘Industrial and Urban Poetry’ will be re-issued in the ARTWORK Collection. We start with a View on the Erasmus Bridge of  Rotterdam (blue or sepia)   (70% wool and 30% silk, 200 x 70 cm, € 95,- , DORIENDAVID) .

The creator of the first modern abstract paintings, Wassily Kandinsky was an influential Russian painter and art theorist. He studied at the University of Moscow, and was later professor at the University of Dorpat in Estonia. He was 30 years old when he began his studies in painting. In 1921 he taught at the Bauhaus school of architecture in Munich, until it was closed by the Nazis in 1933. After the Bauhaus was closed, Kandinsky moved to Paris.

Wassily Kandinsky popularized abstract painting in the last years of the19th century and early years of the 20th century. Kandinsky the artist stressed the integration of the visual and aural in his unique viewpoint on the form and purpose of art. He perceived noises as colors, and this odd perspective influenced the creation of Kandinsky’s artworks. Kandinsky’s paintings sought to demonstrate that absolute abstraction allowed for deeper, sublime insight and that imitating nature simply hampered this endeavor.