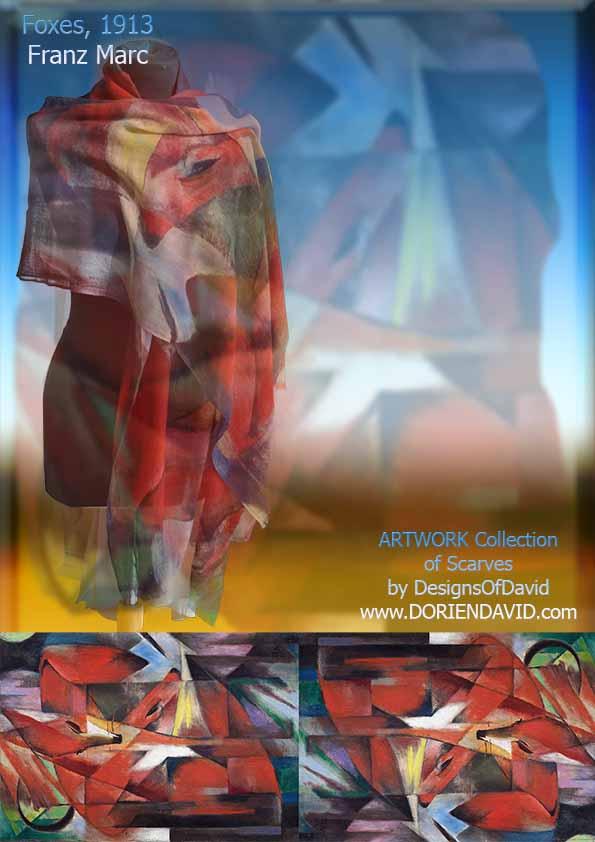 Scarf View on the Erasmus Bridge of Rotterdam (blue), by DesignsOfDavid €95.00

Franz Moritz Wilhelm Marc (1880 – 1916) was a German painter and printmaker, one of the key figures of German Expressionism. He was a founding member of Der Blaue Reiter (The Blue Rider), a journal whose name later became synonymous with the circle of artists collaborating in it.

His mature works mostly depict animals, and are known for bright colouration. He was drafted to serve in the German Army at the beginning of World War I, and died two years later at the Battle of Verdun.

In the 1930s, the Nazis named him a degenerate artist as part of their suppression of modern art. However, most of his work survived World War II, securing his legacy. His work is now exhibited in many eminent galleries and museums. When up for auction, his major paintings attract large sums.

One of the most well-known examples of Marc’s cubist paintings, The Fox is a wonderful example of a typical Marc piece. Breaking down realistic, natural forms into abstract, prismatic forms in bold colours.

It was Marc’s artistic philosophy that colours spoke an emotional language, almost as though each colour could hit a very specific emotional note. Much in the way that a musician plays a series of notes to play a song that evokes a feeling, Marc aspired to do the same with the carefully chosen colours in each of his